Some brief notes: Have your rogue do the anesthetic poison on a third weapon trick. Yes, it sucks. For Baltharus: Picking up the add without it killing people may be hard. 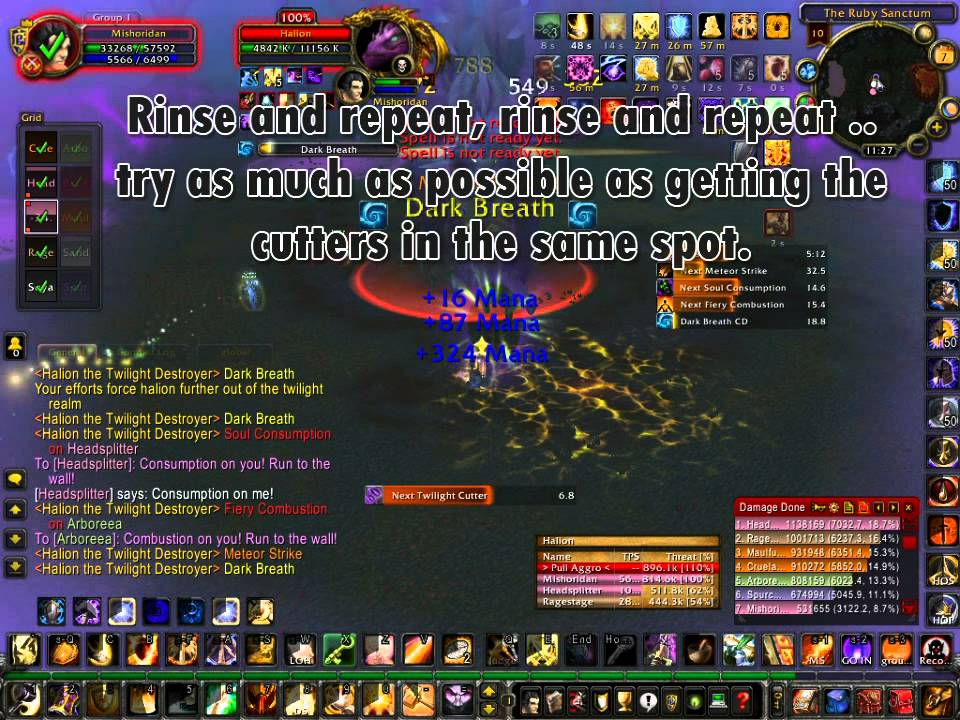 Some brief notes: Have your rogue do the anesthetic poison on a third weapon trick. Yes, it sucks. For Baltharus: Picking up the add without it killing people may be hard. Blade Flurry is painful. And have him use cooldowns during Blade Flurry. For the General: Having 3 might; managing three would probably be the difficult part. Do have DPS switch to adds when they come up. Halion Now, for the main event.

Three phase fight. Typical raid comp setup for new progression content — 3 healers, 5 DPS, two tanks. Phase 1 is pretty simple, light healing, etc. The dragon is a typical dragon — breathes fire, hits things with tail, etc. Occasionally, Halion will mark someone with Fiery Combustion. You want the person to get out to the edge of the arena, then get dispelled. The debuff is dispellable by both Curse dispels and Magic dispels — so every healing class can dispel it. This becomes more important later on.

When dispelled, will drop a fire puddle that will knock back anyone standing too close — hence the reason to drop it at the edge. Additionally, Halion will call down a meteor strike: Once the meteor his the ground, it will explode fire in 4 directions.

Phase 2 Now it starts to get hard. Phase 2, everyone enters the shadow realm, tank first. Once the tank is through, hop through the portal and have all of your DPS stack up on his left side again. In the Shadow Realm, there is the new favorite of every meter busting disc priest: Combustion is now Soul Consumption ; almost the same mechanic, but instead of pushing out, it pulls people in. In heroic, people in the void zone also get snared.

The most important new behavior, though, is the Twilight Cutters. These shadowy orbs of death 2 on normal; 4 on heroic will spin around the edge of the room. Those beams Hurt. Anyone standing in them when they turn on will be dead in.

What this means is that your Shadow tank has a hard job: Basically, if you can time it right, you should be able to rotate Halion only when the beams are on.

Minimizing movement in the shadow realm is a key component of success in encounter. Doing this right gives ranged DPS more time to keep DPSing without moving, less likelihood of someone running ahead into flame breaths, less need to manage space for Consumption, etc. The entire raid needs to rotate forward with the dragon when the beams are on. Have all your healers hot up your physical tank before they run out. Phase 3 Phase 3 is the combination of Phase 2 and Phase 1; half your raid including approximately half your DPS need to go out, and half your raid stay in.

The ticking debuff favors raid healing; bubble spam will not keep your raid alive. A disc priest can handle the healing outside reasonably well: I would assume almost any healing class could take the outside reasonably well; if your tank gets behind on heals, due to dispel or whatever, use a cooldown to catch up.

The mechanics of each realm are approximately the same, just with fewer people to help with them. However, there is a new mechanic: The reason I said to split the DPS evenly is because you essentially want to have even DPS in both realms; no mean feat to balance considering the movement in the shadow realm. Physical DPS will do much better in the shadow realm, and ranged in physical, due to the movement in Shadow.

You really want to keep this corporeality even. Phase 3 is all about survival; we had no enrage problems on any of our attempts. Keep it together, and you can pull it off. For our group, over the course of 2ish hours, it took about 10 attempts before we finally dragged her down. Good luck!

The final boss in the Ruby Sanctum is the dragon Halion. More about the group composition is discussed in the phase three strategy section. A guild attempting heroic Halion must already have nearly Strategy: Phase One: Upon pull, the MT should pull Halion, back him up. Occasionally, Halion will mark someone with Fiery Combustion. Fiery Combustion will deal damage, and is a bit like Rotface’s slimes: You want.

You are here: This dragon-mashing, fire-blazing slugfest will be a test of tanking skills and reflexes as you and your team save the home of the Red Dragonflight and the world from the impending arrival of Deathwing. This guide will breakdown the basic strategy of the 4 bosses in the dungeon for the ever reliable, ever resilient tankers. Knowing whether you are a main tank MT or an off tank OT will help you manage the bosses, the debuff stacks, and the adds. He primarily uses melee attacks so proper threat management can keep him away from your ranged DPS and healers.

New Dawn now officially holds the pride, the respect and the honor of having all of the current Realm First achievements on Deathwing. Moreover, this kill is also noted as the hardest kill ever done and the actual Server First Frapsed kill of Halion on 25 man heroic mode.

This guide will breakdown the basic strategy of the 4 bosses in the Halion has a total of 3 phases where tanking strategies differ from each. A guild attempting heroic Halion must already have nearly Strategy: Phase One: Upon pull, the MT should pull Halion, back him up. Ok so I dont have time today for an in depth tactics description (and i forgot The Physical tank goes in and is given a few secs to build threat on Halion as usual.