WonderHowTo There are more than 2 billion Android devices active each month, any of which can be hacked with the use of a remote administration tool, more commonly known as a RAT. AhMyth , one of these powerful tools, can help outsiders monitor a device’s location, see SMS messages, take camera snapshots, and even record with the microphone without the user knowing. Remote administration tools were first programs intended to provide technical support to remote computers by allowing an administrator to log in and control the device directly. However, hackers quickly saw the potential of these tools and started using them for more nefarious deeds. 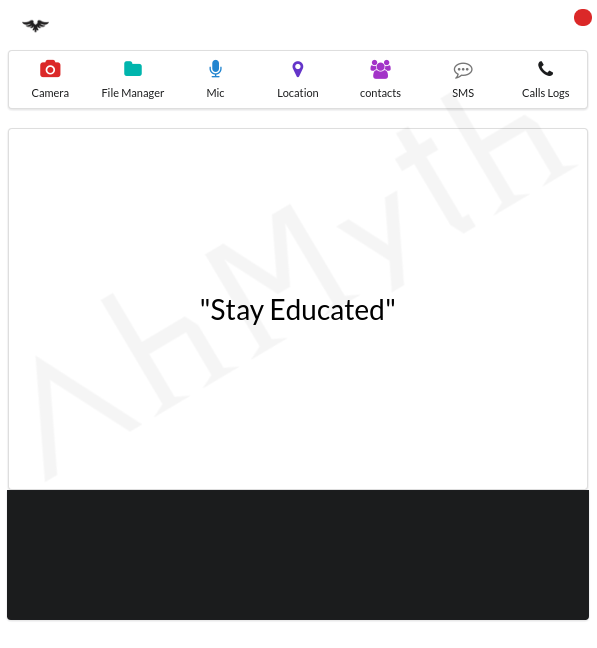 WonderHowTo There are more than 2 billion Android devices active each month, any of which can be hacked with the use of a remote administration tool, more commonly known as a RAT.

AhMyth , one of these powerful tools, can help outsiders monitor a device’s location, see SMS messages, take camera snapshots, and even record with the microphone without the user knowing. Remote administration tools were first programs intended to provide technical support to remote computers by allowing an administrator to log in and control the device directly.

However, hackers quickly saw the potential of these tools and started using them for more nefarious deeds. Today, advanced RATs are used to remotely access and control a wide variety of devices, but today we’ll focus on one of the world’s most popular — Android. While Android RATs aren’t a new thing , what makes this one stand out from the crowd is the simple and easy-to-understand graphical user interface. Don’t Miss: The first is a server-side application based on Electron framework , in our case, just our desktop or laptop, but this could be scaled up to some degree if needed.

This acts as a control panel which we use to create and connect to the RAT. The second part is client side, which is the infected Android application we’ll use as a backdoor. Below you can see a quick video demonstration of AhMyth in action, courtesy of the AhMyth team.

Step 1: The first is to directly use the source code from GitHub. The second is to use the binaries they provide. Method 1: From Source Code If you chose to start with the source code, then you’ll need to check that you have a few prerequisites installed. Java — it’s used to generate the APK backdoor. Electron — it’s used to start the desktop application. Electron-builder and Electron-packer — they are used to build the binaries for macOS, Windows, and Linux.

Once you have those prerequisites, you’re ready to proceed. First clone the code from GitHub with the following commands. Then move to the AhMyth-Android-Rat directory with the following. Some users have gotten errors when attempting to start it. If you do, try again running it as root, as seen below. From Binaries The source code is one way to download it, but if you’re lazy like me, there’s a slightly easier way — use the binaries!

It’s particularly nice when you’re working on a Windows computer and don’t want to mess around with the command line. This shouldn’t be a concern as most people will already have it, but do check that Java is updated on your computer. Navigate to the AhMyth release page and download the release for your system. Currently, they only have Linux and Windows files uploaded. Once you download the right file, open it up on your computer, and it should start installing.

It will automatically open when it completes. After that, we should be ready to go! Step 2: Build an APK Now that we have the program up and running, it’s time to build an Android application with a backdoor. At the top of the screen, select “APK Builder. For testing purposes, I’ll just be using my local Wi-Fi network.

However, if you wanted it to work outside of the local network, you would need to port-forward your computer to the internet and use your public IP address.

AhMyth can build an APK two different ways. It can create a standalone APK or be used to infect another application in order to remain hidden on the target device. Today I’ll just be creating the default standalone APK, but if a malicious user were deploying this in the real, they would very likely be binding it with another APK.

Once you have all the settings selected you’re ready to build the APK, just click on “Build. Step 3: All of the standard attack methods apply — anything to get the user to download the APK. Social engineering tends to work best. For example, if you know the person, then recommend an app to them and infect it. By far the most effective method is if you have physical access to the phone, it only takes a few seconds to download and hide it.

If you chose this method, then an easy way to do it is by saving the APK to Google Drive and sending the phone a link. On most phones, the download should only take a second or two. If the Android phone doesn’t want to install it, they probably never enabled “Unknown sources” in their settings. Open up the Settings, then go to “Security” and check “Unknown sources. More Info: Start to Listen In the top left of the AhMyth screen, select the “Victims” tab, then change the Port number to the one you are using.

You can also leave it blank for the default. Next, click on “Listen. Step 5: Open the Lab Now that you have a RAT up and running on the target device, you can start doing remote administration.

Click on “Open The Lab” button, and a new pop-up window will appear. If you’re familiar with other Android RATs like Cerberus , then you might be a little disappointed with how few features there are, but I would remind you that this is still only in the beta stages. The features it does currently have are quite powerful.

Let’s take a look at a few of them. The “File Manager” is great because it lets you see everything on the device right down to the firmware. With this, you could potentially uncover all sorts of sensitive information, whether that be passwords and session cookies or compromising photos.

Another feature is the ability to record audio via “Mic. Along the same lines as the last one, you also have a tracking function “Location” so you can not only know what they said, but also where they said it.

One note on this, however, is that it can be fooled by a simple GPS spoofer application. I used one on the victim device to take the screenshot below. If you really like to sow chaos, then you’ll love this next feature: A simple way to use this would be to hack someone’s Facebook by resetting their password with an SMS text, then use the code that is sent.

You can use your own imagination for all the things you can do by sending messages from the target’s phone. Now you may have noticed that I skipped over the “Camera” feature. I did that because I was unable to get it working on my device, which could just be a problem with the old Android I was using for testing. In principle, it’s supposed to allow you to send commands to take pictures with the front or rear camera and have them sent back to you.

This doesn’t mean that all the Google Play apps are safe, but they are much safer than some random app found online since Google does scan them for malware to the best of their abilities. Installing from “Unknown sources” is disabled by default in Android , but if you allow this, you also greatly increase your risk as you will no longer get the security prompt. If you do ever have a legitimate reason to download an APK from outside Google Play, be sure to tap “Allow this installation only,” otherwise you could accidentally permanently enable “Unknown sources.

Also, be careful who you let have your phone, as it only takes a few seconds to download one of these RATs. An example of this can be found in Mr. Robot , when Tyrell Wellick installed malware on an employee’s Android phone in seconds. Robot One more probably obvious way to help prevent malicious software from installing on your Android device: Install software updated when they come out, as Google and OEMs push on security fixes in almost every update, not just new features.

And last but not least, you can consider installing antivirus software on your Android device. This will not help you out all of the time, but it’s better than nothing.

You can find a good list of antivirus apps for Android over on Gadget Hacks. Thanks for reading!

AhMyth, one of these powerful tools, can help outsiders monitor a device’s AhMyth is a new, up-and-coming, open-source Android RAT. Androrat is a client/server software advanced in Java Android for the DroidJack is an android remote administration tools lets in a person to. TheFatRat is a simple Android RAT tool to build a backdoor and post exploitation attacks like browser attack. This Android RAT tool produces a.

If youвre the creator, then it performs a massive role for your profession. In case, you need to be an exceptional accountant or the best clerk then Office 2013 latest version is the final equipment for you.

Because the ultra-modern model includes all the premium tools that will help you lots. After downloading it and activation of its premium model, you may be capable of use its all office variations at your fingertips. With MS PowerPoint person can create PPT file and then edit transitions of slides and plenty extra.

You have Successfully Subscribed!

However, it removes all of the previous failures of MS Office. В  It may be very a good deal critical software for our daily lifestyles. It is so crucial to students as well as to the specialists.